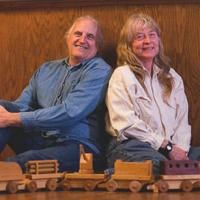 I began working with leather over fifty years ago. One of the first things I made was a small clutch for my mother – now my granddaughter has it.

I was born in southern Vermont and joined the US Navy right out of high school. I made custom items for my shipmates to give to their families while we were at sea. I really started to expand my knowledge and proficiency in the early 80’s. I was an electronics instructor in northern California which allowed me to spend more time with my passion. In the late 80’s and early 90’s my work had me traveling about 80% of the time. So I would carve pieces for clutch purses, handbags, and wallets, then lace them while flying to a destination.

I moved to the Northeast Kingdom in 2010 and fully retired in 2011. I love to carve flora / fauna, figures (mostly animals), basket weave, and will use photos to incorporate into a purse, wallet, or handbag. I truly love a challenge when it comes to custom work in leather, I received permission from an artist to put one of her paintings into leather. My pet peeve is seeing ‘fine grain’ leather wallets and bags that only have one ounce (1/64th of an inch) leather adhered to cloth and last about a year. I know some of my work is still being used over thirty years later. I am now passing on some of my knowledge to students in afterschool programs in local schools.

I can’t remember a time when I wasn’t working with wood, from building forts from scrap lumber from around the house to fixing up the playhouse with wood which floated down the river.

When we moved from North Central Mass to Southern NH; my first day of school I was told I could take woodshop instead of Home Economics, which was a rarity in the early 70’s. Three years later I earned the “Golden Hammer” award for excellence in woodshop (above all the ‘boys’).

In the early 80’s; I was working in NH making the inlay for Gurian Guitars in Swanzy and picking the barrels for scrap lumber to make toys for my young son. After Gurian went under I went to a furniture making company in Jaffery then to Gates Inc in Peterborough making cases for clocks and tools, still picking barrels for wood.

In the mid 80’s I got together with my mother and we started to attend Craft Fairs; she making Barbie doll and Cabbage Patch doll clothes, me making wooden toys (even my son at six was making and selling tops).

I moved to Vermont in the late 80’s. Was a Physical Education teacher and ski instructor in the area for over 20 years – doing craft fairs on the side. Last year my husband and I both retired and we have again hit the craft fair circuit. I love working in the wood shop making toys that will not only out last the kids but their children as well. My grandson is using some of my son’s toys, but is getting far more of his own ‘custom built toys’ with some exotic woods. My pet peeve is seeing toys that will not last due to inferior materials (plastic and soft woods) in stores. During the winter when not in the woodshop you will still see me on the mountain teaching the 4-6 year olds how to ski.

I use a Danish ,non toxic, oil finish for most of the items

The Block wagon gets a mineral oil, bees wax finish

The child's swing, first gets a Watco Danish oil then 3 coats of polyurethane